My initial thoughts were … Surely this has to be a tragic accident. He seemed such a great bloke, very personable; in fact, I reckoned he was an all-round good egg.

True, some spotted the tell-tale signs of something a little darker when he was beaten by Alan Oliveira in the T44 200 metre race at the Paralympics back in the summer of 2012 but surely he couldn’t be a murderer, could he?

But what I noticed is that I had myself thought of Pistorius as some sort of Hero. Someone to look up to.

Our obsession for making ‘Heroes’ out of anyone, be they: Sports stars, Pop idols, Church Leaders or Politicians etc. simply elevates them away from us mere mortals. By putting anyone up on a pedestal, we somehow expect them to be beyond our failings and shortcomings, don’t we?

Do some even start to believe that they’re ‘above the law’? The media is filled with such accounts, so you tell me.

When the world has labelled you a hero or a good girl or boy or whatever … it’s hard to maintain that position without something giving way. The cracks will show.

The truth is that we all have a dark side. The shadow, Carl Jung called it. It’s the parts of us that we desperately try to deny, repress and hide, or that we’re ashamed of and have judged as bad or unacceptable. There is a part of each and every one of us that is capable of murder.

Far better that we ‘own’ our dark side in the first place, Learn to integrate those shadow figures into our hearts filling them with love. It’s all they want and need anyway. 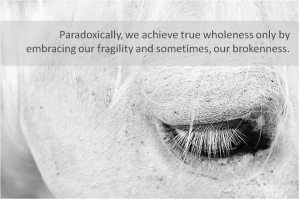 This site uses Akismet to reduce spam. Learn how your comment data is processed.

Journeys to the Heart